If you do a quick research of things to see or do in Skopje, Macedonia, the first thing you will see is the multiple results mentioning the Stone Bridge.

Without a doubt, the Stone Bridge –also known by its lesser name the Dušan Bridge after Stephen Uroš IV Dušan of Serbia– is Skopje`s most famous symbol. 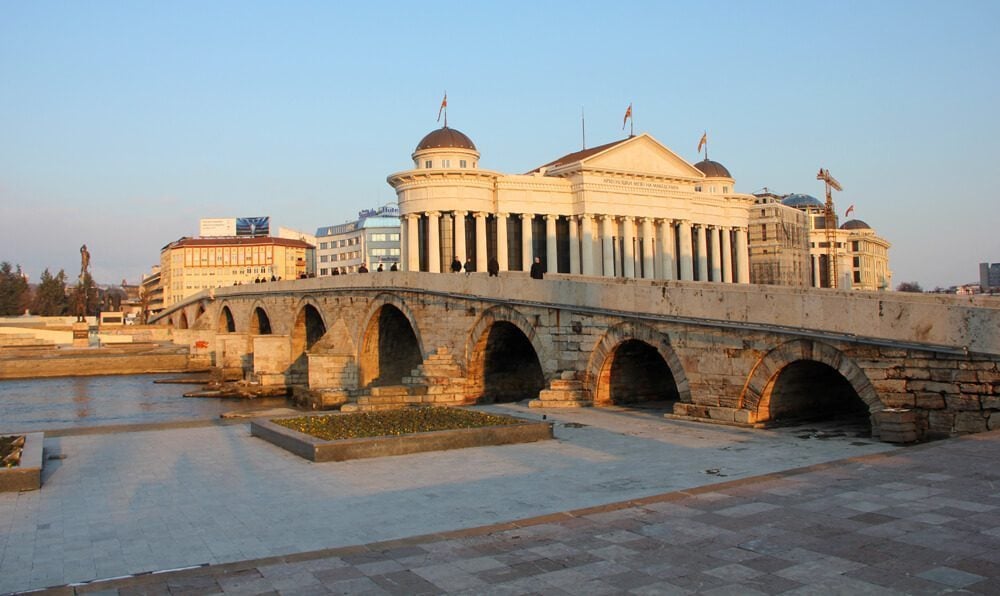 The bridge, which crosses the Vardar River, is not only a symbol of Skopje, but it is the main element of the coat of arms of the city.  Today, it connects Macedonia Square, in the center of Skopje, to the Old Bazaar.

In a way, it feels like crossing from an Eastern European city on the left bank with the city square and commercial buildings, to a Middle Eastern city on the right bank with its smaller scaled Old Town and Bazaar (though recently some ugly government and public buildings have been built on that side of the river… ugh).

This bridge was originally built in the Roman Period, during the reign of Emperor Justinian the First, but the Ottomans later rebuilt it during the fifteenth century during the rule of Sultan Mehmed II.

Macedonia passed from the rule of Romans to Ottomans, to Bulgarians, to Serbs and Yugoslav Communists, and last but not least to the Macedonian Independent Republic.

In the same way, throughout history, everyone who entered Skopje as its conqueror did his part in building, rebuilding, or reconstructing the bridge.  But, even though it has been repaired and modified several times, it still preserves its original appearance.

Recently in history, the bridge almost came to an end when Nazis placed explosives on the bridge in 1944.  But, when Skopje was liberated, the activation of the explosives was prevented and the bridge was saved from destruction.

Some executions have also taken place on this bridge, such as the execution of Karposh in 1689 – the leader of the Christian anti-Ottoman uprising in the Central Balkans.