How to find cheap airfare

We all know that the airline industry is directly dependent on so many factors that affect airfare prices like; oil, current economy, season of the year, materials, and so many other costs.  Most of the time the airfare can take most of our travel budget; that’s why, finding a cheap airfare is as important as finding a good hotel, tour, backpack.  Even more, airfares can dictate your trip destination and time of travel.  But, there are many ways of finding good deals, and we will point most of them here:

Being flexible is one of the best ways to find cheap airfares.  Flexibility alone can save you hundreds of dollars in long distance flights.  There are many ways of being flexible… 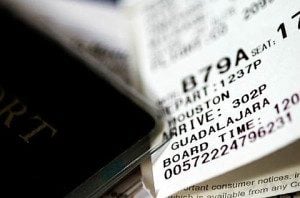 A good rule of thumb is to check for airfares between 90 to 60 days before the trip.  Usually, this is the timeframe when airlines have the cheapest fares.  If the trip is closer than that timeframe, usually buying the ticket at least 21 days before the departure can still give you a good deal.  Since the airline industry is very volatile, always look to book your flight at the price you are willing to pay, not at the cheapest price you could find.  You never know if the price will go up or down the next day.  Although it’s not so recommended in terms of planning, last minute deals can also save a lot of money.  Sometimes being spontaneous pays!

It is possible to book a flight in a website located in another country. International Airlines can offer different prices on their international websites (for example, the Canadian website for a US airline).  Most of the time the prices are shown in the native currency of the site’s country, so a quick conversion to your currency will show you if it’s cheaper or not to buy on that site.

Frequent Flyer programs are an excellent way to get discounts and even free tickets (just pay the taxes that can be as low as $2.50).  These programs and their awards vary depending the airline, but all of them have the same purpose; reward you for being a loyal customer.  It’s always good to join these programs, as they are free.  Also, credit cards offer rewards programs that offer you the option of converting your points into free tickets, discounts, or upgrades. Points.com is a convenient website that lets you transfer points/miles between different participating rewards programs.  This way, you can transfer certain points from various rewards programs, under a conversion rate, to your preferred program.

Many search engines and airline webpage offer the option of signing up for a mailing list.  They usually send you their current offers and even alert you when a specific airfare you are searching is on a record low price. It’s good to sign up to some of these mailing lists as many special deals are offered for a short period.

As a student, there are many discounts available.  Check STA Travel or other student-oriented travel agencies for more information.  Just be sure to have a current student ID.