I can’t say I felt the earthquakes, or maybe I didn’t notice the shaking due to the train usual movement, but what I did feel after was the shockwave of news about the aftermath.

I was shocked by the images I saw on local newspapers and online, especially the famous picture of the clock tower that was destroyed in half.

Almost two months later I visited Ferrara with the BlogVille project and was more than surprised by what I saw.

Well, it is true that there was some destruction, but it happened in the northern region of Ferrara, not the city itself. 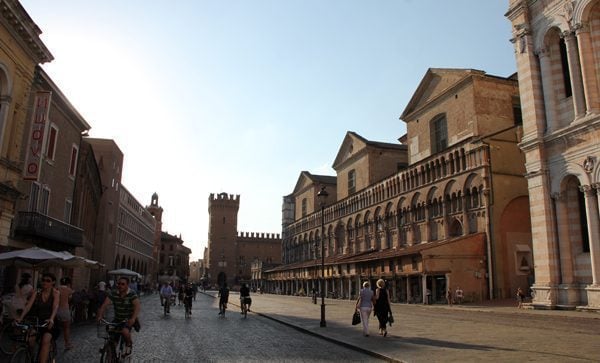 Sure, there were a few cracked buildings and there was minor damage here and there, but had I not known that there were two major earthquakes two months ago, I would have assumed that it was due to aging.

Although Ferrara has a thriving tourism industry, this city is not on the typical foreign tourist’s itinerary.  This makes it perfect for those travelers looking to get off the beaten path of the popular Venice-Florence-Rome route and soak in some authentic northern Italian culture and food!

Before I go on to the sights, I want to say how much I like medieval walled cities.  I find them fascinating and interesting in their own way, especially if they still keep the walls to these days.  Ferrara is a walled city (some parts of it, today), but the curious and unique thing about these walls is that they go almost unnoticed.

Back then, in the medieval era, Ferrara was lucky to have a brilliant man named Biagio Rosetti – the architect who designed the walls.  Walls were necessary for the protection of the city, but they didn’t want the people to feel enclosed, as many medieval walled cities do.

The trick?  Design the walls with the interior side earthed as if it was a green hill or mound (like a park).  From the inside, people would not see a wall but “hills of grass”, but on the outside, the walls looked as normal as any other.  Pretty smart!

Today, you can walk and bike on top of the walls (which is like a linear park) and the rest of medieval and renaissance Ferrara.  Everyone bikes in Ferrara, even the police and ladies in high stilettos!

A fun fact about Ferrara is that it became a major city thanks to the Po River.  It’s important location and the naval trading made Ferrara a major city back then.  But, what is more surprising and unexpected from what you see today is that until around 1135 (before the river changed course) canals ran through the medieval city to the market in the center and the Duomo. It looked like a little Venice!

If you spend a day in Ferrara, then I highly recommend visiting the Duomo (cathedral), which is considered to be a gem of Romanic and Gothic architecture (built in 1135 and designed by Nicolaus).

An interesting fact about this Duomo is that along its exterior walls it had carved the “writing of the free people”, or rules of the free council of Ferrara before the 1800s.

Today, stores lined on its southern façade cover most of the writing, but if you enter stores like Champion you’ll be able to see uncovered fragments of the text – hidden behind the merchandise.  Do take a look at them since it’s quite interesting.

In front of the cathedral, you’ll see the Palazzo Ducale, which was built in 1243 as the residence of the d’Este family until the sixteenth century, when the court moved to Castello Estense.

Also well worth visiting is the il Castello Estense.  Originally this was only a watchtower, Torre de Lioni, and only used for military defense, but later three more towers were built to form an inner square and the current castle shape.

In it lived the d’Este family (after 1476), who ruled Ferrara from 1208 to 1598.  They were responsible for expanding the city (now the renaissance area), creating many monuments and buildings we see today, and for turning it into a center for the arts.  Artists like Leonardo Da Vinci, Raphael, Titian, and Petrarch, spent time here under their patronage.

Unfortunately d’Este family lacked an heir, so after 1598 Ferrara started losing importance after the “disappearance” of the family and the administrative takeover of the city by the pope.   It wasn’t until the 1900s that Ferrara flourished again and regained some of the glory from its past.

After all this history and walking, the best way to end the day is by visiting Al Brindisi.  This is the oldest enoteca in Europe, and a damn good restaurant if you ask me.

Wooden screens and walls full of random objects and hundreds of dusty wine bottles make the atmosphere of this place perfect for a cozy Italian meal.  Supposedly, Copernicus was a tenant here when he was a student in Ferrara.

The restaurant is located at Via degli Adelardi, the street just to the left of the Duomo. Don’t miss the trademark pasta of Ferrara, cappellacci di zucca (round pasta stuffed with squash or pumpkin).