Copán Ruins, considered by many one of the most spectacular cities of the ancient Maya civilization, is a ruins complex known for its beautiful stone temples, altars, hieroglyphs, and stelae.

Today, it is one of the most popular attractions in Honduras. However, unlike some other touristic attraction in the region, Copán Ruins (or Copán Ruinas in Spanish) still conserves its mystical aura of a city that is still somewhat lost, and it’s now being rediscovered.

It is worth taking half a day to visit these ruins, and here I’ll share all the monuments, stelae, and historical spots you shouldn’t miss visiting.

Even though Copán was occupied for more than two thousand years, the Copan Ruins complex we see today was mostly built between 400 and 800 AD, when it served as the capital city of a major Classic period kingdom. 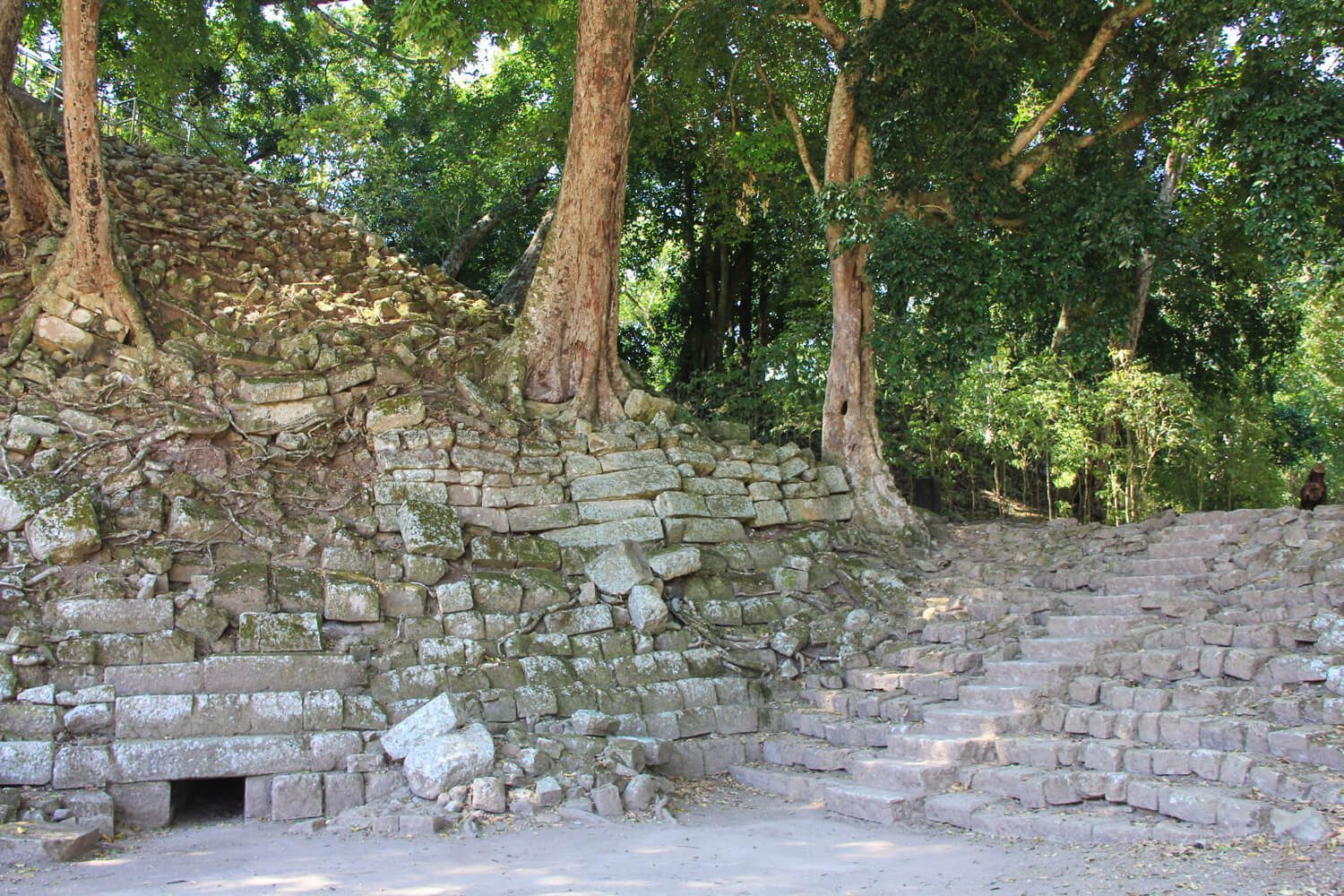 Copán was a powerful city ruling a vast kingdom in the southern Maya area. But this good fortune took a turn when it suffered a major political disaster in AD 738 – when Uaxaclajuun Ub’aah K’awiil, one of the greatest kings in Copán’s dynastic history, was captured and executed by the king of Quiriguá, his former vassal.

This unexpected defeat resulted in a 17-year hiatus, that combined with other factors, served as the catalyst to the sudden abandonment of the city at the beginning of the 9th century.

Even though Copan was well known by locals since the early 19th century, it wasn’t until 1975 that excavations began to uncover the mysteries behind this lost city. Still today, these ruins are an active archaeological site, with ongoing excavations shedding new light on the history behind Copán.

Recent studies of skeletons suggest that the city was abandoned after becoming unstable around 800 A.D.

By that time, the city had grown exponentially to approximately 25,000 people, and constant droughts had destroyed vital crops in the area. Eventually, all the resources available were consumed, forcing the residents to abandon the city.

Today, the Mayan Ruins of Copan are one of the most important and impressive Mayan sites to visit in all of Mesoamerica thanks to its stunning stone sculptures and intricate hieroglyphs. The ruins were added to the list of UNESCO World Heritage sites in 1980.

Getting to the Copan Ruins

First, you must reach the small town of Copan Ruinas in the western part of Honduras, about 6 km from the border with Guatemala. I know it can be confusing when both things are named the same.

Copan Ruinas is about 180 km southwest from San Pedro Sula or 420 km northwest from Tegucigalpa.

The Copan Ruins are located 1 km east of the town of Copan Ruinas.

To get to the ruins, you can walk a bit over 1 km from the town’s central park (Parque Central), heading south on Av. Copan and then merging east on the CA11 Avenue until you reach the ruins to your right.

If you are staying in Copan Ruinas (the town), I’ve written a short guide of Copan Ruinas with recommendations on other things to do, where to stay, and more. 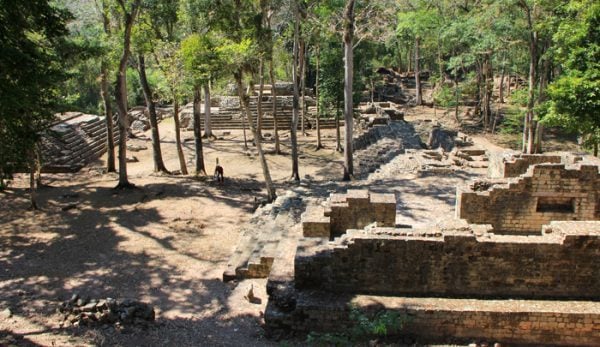 The entire ruin site includes more than 4,500 structures (spread over 24 sq km) with most of the focus placed on the “Principal Group,” which covers approximately two square kilometers. Also, there is a secondary area –about one kilometer away– known as Las Sepulturas.

Copan, the principal group and larger site, is a Mayan complex built for the high nobility. In contrast, the smaller one, Las Sepulturas, is a residential complex built for well-established residents of the Lenca indigenous group.

Since the sites sit in an unbelievably lush valley, it is easy to spot a variety of resident animals that roam around the ruins. Among those are monkeys, guacamayas (large parrots), macaws, sloths, and peccaries, among others. 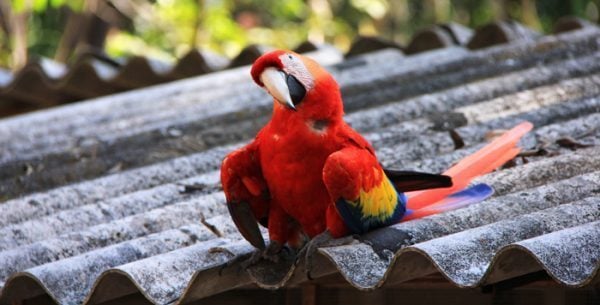 At the Principal Group, you’ll see a massive complex consisting of several plazas and temples built on various levels and adorned with intricate hieroglyphics patterns and stelaes.

It takes a few hours to walk the entire area, so make sure you bring water with you and are prepared to spend a few hours under the sun.

These are the major areas of interest that you shouldn’t miss: 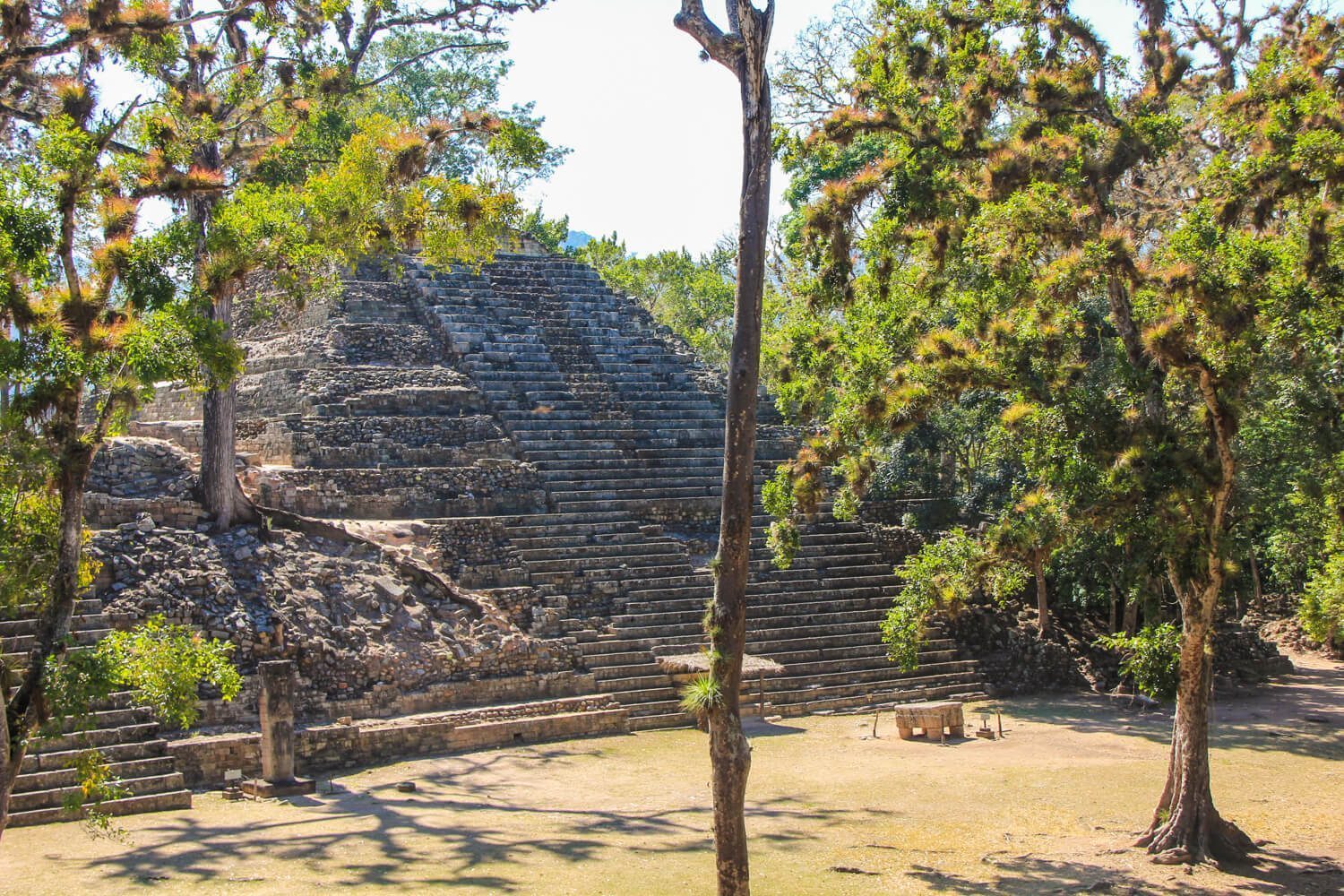 This area consists of both the western and eastern courts. The western court includes Temple 11, which was built during the reign of Yax-Pac, the last ruler of Copan, as his elaborate gateway to the underworld.

Temple 16 was built on top of a previous temple (the Rosalila Temple or Temple of the Sun) without damaging the remains. Its exquisite stucco masks of this building retain their original colors. This is perhaps the best-preserved stucco building in the entire Maya civilization.

You can climb to the top of Temple 16, approximately 100 feet high, where you can see the overall layout of the ruin complex.

Located at the base of Temple 16 is the reproduction of Altar Q, which shows the succession of all 16 members of the Copan Dynasty, including Yax-Pac, seated on their own name glyphs.

The altar is completely deciphered, and in it, you can see the founder of the dynasty Yax-Kuk-Mo, as he is passing the scepter of power directly to Yax-Pac. The original altar is in the museum.

The immense plaza is famous for its stelae and altars that are found scattered around a well-groomed lawn. One of the most famous stelae is of “18 Rabbit”, who was the 13th ruler of Copan.

The sculpture depicts the ruler with a decorative headdress and an intimidating scepter with a two-head snake. The area also includes the ball court, which is the second-largest court in Central America. 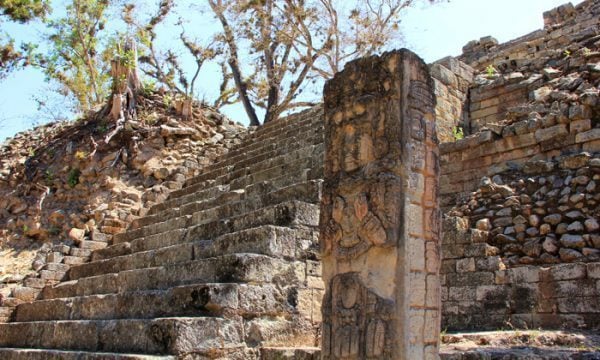 Impressive in detail and humbling in size, these unique sculptural monuments make Copan shine among the ruin sites of the Mayan empire and are invaluable to our understanding of this lost civilization.

The stelae are three to five meters tall and are carved in incredibly intricate high relief.  They are portraits of the greatest rulers in the history of the city.

On one side, you see carved the ruler’s image, and on the other, you see a series of hieroglyphs that describe such ruler’s power and politics. 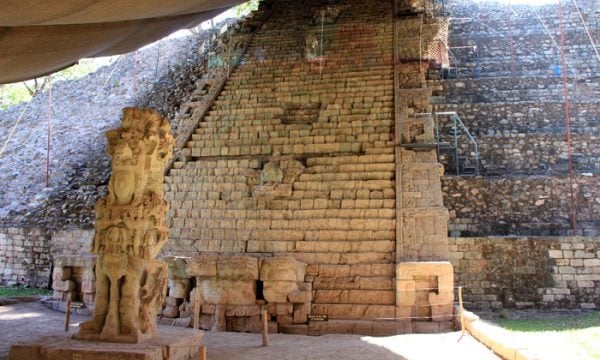 The Hieroglyphic stairway is the most famous of Copan’s monuments. The stairway is located on Temple 26, and it contains 63 steps entirely carved with hieroglyphs depicting the history of the royal house of Copan.

This stairway is the longest known text of ancient Mayan civilization to date, and archaeologists are still studying and deciphering the whole meaning of the hieroglyphic writing.

Located underneath the Acropolis are over 4km of tunnels where you can see the earlier stages of Copan’s civilization. Of these tunnels, only two are open to the public: Rosa Lila Tunnel and Los Jaguares Tunnel.

Rosa Lila Tunnel is located under Temple 16 and includes the remains of the Rosa Lila Temple.

Los Jaguares Tunnel, on the other hand, is over 700 meters long and contains one of the most important tombs in Copan; Galindo’s Tomb. Even though excavations in Copan started in the 70s, this tomb was discovered over a century ago! There you’ll also see a system of aqueducts, tombs, and former baths.

Located at the entrance of Copan, the Mayan museum includes many sculptures and replicas from the site. The entrance to the museum is made in the form of a snake’s mouth, representing the Mayan belief that snakes represent a journey into the underworld.

The museum’s most notable attraction is the full-size replica of the Rosalila Temple, complete with the bright red colors and ornate designs that once composed this structure. Also, here is the Altar Q, the square stone that depicts the rulers of Copan. 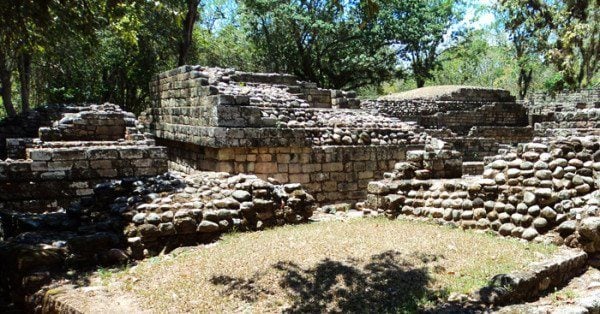 For some reason, many visitors don’t get to visit Sepulturas, but it is well worth a visit since it shows a different scale and perspective of the Mayan civilization.

You can either walk an additional kilometer or take a tuk-tuk to get to Sepulturas. The entrance fee to Sepulturas is included in your Copan ticket. You can hire a guide for a one-hour tour of the residential complex.

Las Sepulturas (the burials) got its name due to the many burials found under each house. At first, archeologists thought it was some sort of cemetery, but they later discovered families buried their loved ones inside the house, under their stone beds.

Prices and Hours of the Copan Ruins

The main entry fee is $15, and it includes the entrance to Copan and Las Sepulturas. The Museum of Mayan Sculpture has a separate entrance fee of $7.

Lastly, to enter the two tunnels open to the public – “Rosa Lila” Tunnel and “Los Jaguares” Tunnel – have an additional fee of $15 and must be visited with a guide.

Guides for the rest of the archaeological park cost $30-40 per tour with any number of people.

Guides can be hired for groups of up to 10 people, and the tours can last between two to four hours (depending on the number of stops).

Copan Ruinas is open seven days a week 8 am – 4 pm. Due to the hot Honduran climate, it is recommended to go early in the morning.

Lastly, if you’re interested in knowing more about the ruins and its history, the Museum of Archaeology, located in downtown Copan Ruinas, has an entrance fee of $2.

And one last tip… be careful when climbing up the ruins. It’s relatively easy to trip and fall. Talking from experience! I made my personal sacrificial blood donation there. 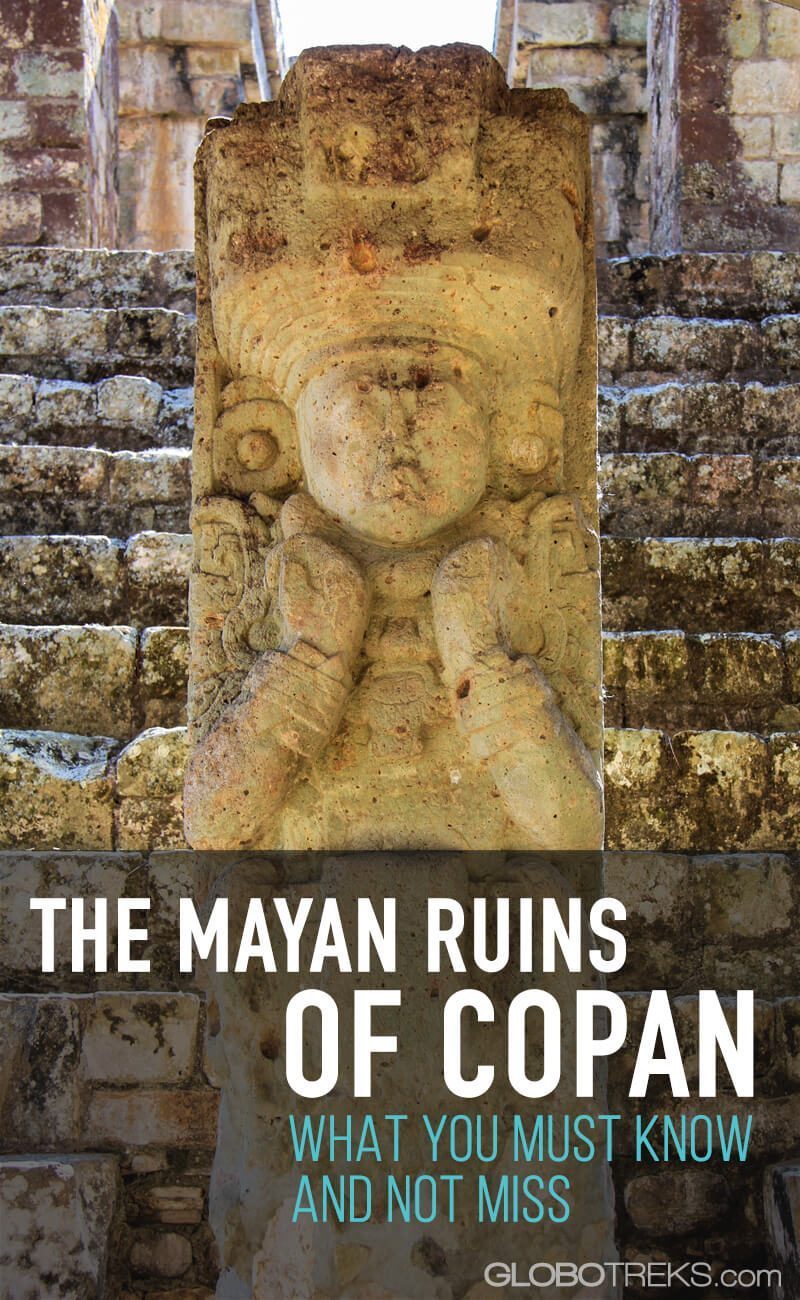